Our state budget is a moral document that reflects what we value, and our elected legislators should be able to shape it. Maryland is the only state that gives the Governor unfettered power over the budget, but Question 1 can fix that, creating the same checks and balances that exist in every other state and at the federal level.

On Question 1, join everyone at JUFJ and neighbors from across the state in voting FOR the Constitutional Amendment.

JUFJ has no position on Question 2.

Our elected representatives should be accountable to the whole community, not to deep-pocketed corporate donors. Question A will create a Fair Elections program to amplify the voices of Baltimore County working families. Under Fair Elections, candidates who accept only small-dollar donations and don’t take giant checks from lobbyists, corporations, or PACs will receive matching funds. That lets regular people without connections run for office — and win.

Join everyone at JUFJ and neighbors from across the county in voting FOR Question A.

JUFJ has no position on the other Questions on the Baltimore County ballot.

The power to shape the city budget is a cornerstone of the movement to hold police accountable. We must imagine and fully fund community-driven alternatives to policing, in order to radically reduce the scope of racist violence. To achieve these goals, the City Council must be able to reduce the budget for policing and reallocate funds to other parts of the budget. Question F will give the Council the ability to reallocate funds, and will give the people of Baltimore the ability to tell the Council to defund the police.

Join everyone at JUFJ and neighbors from across the city in voting FOR Charter Amendment Question F.

JUFJ has no position on the other Questions on the Baltimore City ballot.

JUFJ has no official positions on the other statewide, city or county questions, but please use the written guide below to help inform you.

Question 2 asks if you are for or against authorizing sports + events betting to be used for raising revenue for education. While JUFJ does not have an official position on Question 2, we would like to note that gaming is a sharply regressive form of revenue collection as it has a much higher impact on lower income folks than others.

To see some arguments for and against Question 2, take a look at the League of Women Voters’ guide – scroll down to page 10.

This ballot question would authorize Baltimore County to borrow $54,990,000 for public works purposes, including streets and highways, bridges and storm drainage systems.

This would authorize Baltimore County to borrow $15,000,000 for refuse disposal projects, such as the construction, improvement and modernization of county refuse disposal facilities.

This would authorize Baltimore County to borrow $46,000,000 for public operational buildings including health, police, fire, recreation, libraries, senior center and detention buildings or facilities and equipment.

This would authorize Baltimore County to borrow $35,000,000 for parks, preservation and greenways projects, such as improving playgrounds, parks, recreational facilities and community centers.

This would authorize Baltimore County to borrow $17,500,000 for community college projects, including the construction, improvement, maintenance, and modernization of buildings.

This would authorize Baltimore County to borrow $200,000,000 for public school projects, including but not limited to acquisition, construction, reconstruction, improvement, extension, repair, maintenance, conversion, and modernization of public school buildings and sites.

This would authorize Baltimore County to borrow $4,000,000 for agricultural and rural land preservation projects, including but not limited to the purchase of land, development rights and conservation easements (a conservation easement is a voluntary, legal agreement that permanently limits uses of the land in order to protect its conservation values).

This would authorize Baltimore County to borrow $2,500,000 for community improvement projects, including but not limited to construction, renovation, extension, alteration, repair or modernization of street curbs, gutters, water, sewer and other utilities, and sidewalk and pedestrian system improvements.

This would authorize Baltimore County to borrow $20,000,000 for waterway improvement and stormwater-related projects, such as shoreline stabilization, shore erosion control, wetland restoration and streambank and riverbank restoration.

Questions A-D are to vote for or against General Obligation (GO) bonds. GO bonds are borrowed funds that are used for capital projects. They allow the city the flexibility to fund priorities, particularly for projects and items for which there are no other fund sources available. Source: https://planning.baltimorecity.gov/bond-issue-questions

The Affordable Housing Loan sets aside funds exclusively to be used for affordable housing.  Eligible uses include acquisition, preservation, production of new housing, demolition, rental assistance, housing counseling and project finance comprised of loans (including forgivable or fully amortizing) or grants as well as other related activities. These funds could be used to support the Affordable Housing Trust Fund.

Baltimore City Public Schools, the City of Baltimore, the State of Maryland, and the Maryland Stadium Authority are partnering to implement the 21st Century Schools initiative, a nearly billion dollar initiative to renovate or replace 28 school buildings. This loan authorization complements that investment by making critical systemic improvements, such as fire alarms, HVAC systems, and other urgent needs in schools that are not currently funded through the 21st Century Schools Initiative. This loan authorization also allows renovation and replacement of additional schools to take place, leveraging traditional State capital support through the Maryland Public Schools Construction Program. This City contribution is used to match approximately $30 million in annual State funding through the Public School Construction Program for improvements to school buildings outside of the 21st Century Schools initiative.

Baltimore is committed to supporting and promoting efforts to revitalize and stabilize neighborhoods and support investment that retains and attracts jobs in the City and increases tax revenues. Community and Economic Development funds will be used to attract and retain residents, jobs, and other investment. This loan is used to eliminate blight through strategic whole block demolition; provide financing and incentives for private investment; and improve the appearance of commercial and industrial areas.

This ballot question would require a Commission be appointed by the Mayor, Comptroller and City Council once every 10 years to review the City Charter and make suggestions. Currently, the City Charter is not reviewed regularly but instead, on an ad-hoc basis.

“Please note that the language on the ballot for “Question G – Charter Amendment – Vetoes” is incorrect. The correct language is as follows:

Resolution No. 20-20 is for the purpose of reducing the number of votes by City Council members that are needed to override a mayoral veto from three-fourths of the members of the City Council to two-thirds of those members.

If you wish to vote in this contest, please mark your ballot in the space provided for voting on Question G. Your vote will be counted as a vote for the corrected version of Question G set forth on this Notice.”

This would change the number of votes needed for an override from 12 to 10 (there are 14 Councilmembers in the Baltimore City Council).

QUESTION I: Removal of elected officials

This would authorize the City Council to remove a sitting Mayor and other elected officials for committing a felony or misconduct in office.

This would authorize the Baltimore City Auditor to issue subpoenas to any City employee or officer. If approved, it compels employees to produce documents for audits.

This would establish City Administrator as the Chief Administrator of Baltimore City. If approved, it creates an administrative position directly in charge of agency collaboration, evaluation, and maintaining government best practices.

To see another guide from Councilmember Bill Henry’s office on all the Baltimore city ballot questions, take a look here.

How do I register to vote, or check my registration?

Navigate to https://elections.maryland.gov/ and click on “register to vote” to register, or “voter lookup” on the right hand side to confirm that you are registered at your current address. See below: 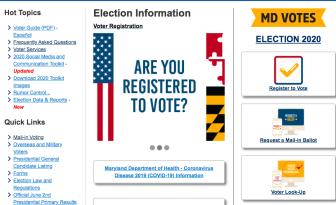 How do I request a mail-in ballot?

Via the same link, click on “request a Mail-in Ballot” on the right hand side and follow the instructions.

If you’ve already requested a mail-in ballot and have not yet received it, you can also use the above link to check on your ballot status by clicking on “voter lookup” and putting in your information. See an example below: 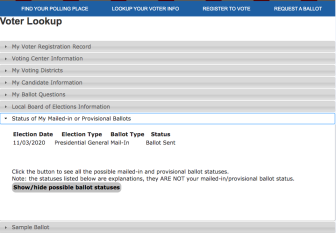 Mail-in Ballots will be delivered in waves, not all at once.  You and your friends & neighbors may receive them on different dates.

What do I do with a mail-in ballot once I receive and fill it out?

What are the deadlines I need to know?

How do I contact my local Boards of Elections?

How do I make sure my accessibility needs are met?

Please navigate to the Board of Elections page to find the resources you need: https://elections.maryland.gov/voting/accessibility.html

After I vote, how do I confirm my vote was counted?

How did these questions end up on my ballot?

Click here to see an explainer on how the process works in Baltimore City, which is similar if not identical in other jurisdictions.

What about the circuit judges on my ballot?

This voter guide is a product of Jews United for Justice (501c3) and not our Campaign Fund (501c4). We do not endorse any candidates in this guide.

How do municipal bonds work?

Learn about them here.

When people say Baltimore city has a “strong Mayor system,” what does that mean?

The Baltimore Brew wrote a three-part series on what this means for our government structure.

Still have a question? Email rianna@jufj.org! 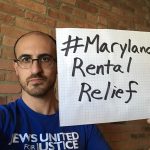 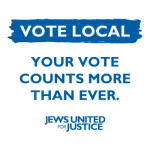