On Thursday, the Maryland Senate voted on the Fight for $15 bill, and it passed with a veto-proof majority. This is an amazing milestone in our struggle for decent wages for everyone in Maryland.

The good news: both the Maryland Senate and House have now passed bills raising the minimum wage, and hundreds of thousands of Marylanders are going to get a raise. JUFJ and our Fight for $15 coalition partners have worked hard to get this point, and Maryland will become the 6th state in the country (counting DC, which is not yet technically a state) to reach $15/hour.

The bad news: The Senate and House passed different versions of the bill, and both approved lots of weakening amendments. Many workers were cut out or had their raises diminished or delayed. The House bill extended the phase-in of $15/hour to 2025, eliminated raises for agriculture workers, tipped workers, youth workers under 17, and removed the automatic increases with inflation that would have kept wages going up after they reach $15/hour. The Senate weakened the bill further by extending the timeline for businesses with fewer than 15 employees until 2028, almost a decade away.

Back to good news: We have another chance this session to make sure thousands of Maryland workers don’t have to wait nearly ten more years for a fair and livable wage.

When the two chambers pass different versions of the same bill, both versions go to a “conference committee.” In that committee, legislators from both chambers negotiate a final version of the bill, which then typically passes a floor vote with ease.

We need to tell the conference committee to improve this bill. The members of the committee are Senators Malcolm Augustine (D47) Brian Feldman (D15), and Delores Kelley (D10), and Delegates Dereck Davis (D25), Kathleen Dumais (D15), and C. T. Wilson (D28). If you live in one of these districts, use the form below to urge them to choose the House’s timeline for small businesses, so everyone can get to $15/hour by 2025.

Even more good news: we can keep fighting to make this raise more inclusive, stronger, and more sustainable next year. Legislation in Annapolis moves slowly, and it has taken us years to get to this monumental but flawed bill.

We aren’t going to stop pursuing justice for Maryland workers when this session ends. JUFJ will be back in Annapolis in 2020, and we’ll be working at the local level until then. Let’s celebrate this victory today, even as we recognize that we have not yet completed the work. 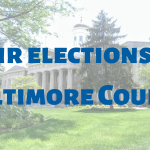