Budget season is officially wrapping up! This year, JUFJ and our partners fought to fund some crucial programs – to provide assistance to excluded workers, to expand behavioral health access, to make housing more affordable and stable. To move the District toward a truly just society is one in which all people have what the Torah calls dei machsoro, resources sufficient for their needs. Below, JUFJ leaders Ben Sharp and Caroline O’Shea and staff organizer Jenna Israel discuss what’s actually in the DC Fiscal Year 2023 Budget and reflect on participating in the budget process.

Celebrate the FY23 budget with us!

Testifying via Zoom at a DC Council budget hearing was an empowering experience. By sharing my personal story regarding my struggle to secure affordable housing in DC during the pandemic, the need for oversight to ensure affordable housing programs function properly, and the Jewish values that underpin why I care about housing affordability, I contributed a perspective that served a specific political purpose. I also felt solidarity with the other witnesses from the Fair Budget Coalition. Our collective voices could not be ignored, even as Chairman Mendelson appeared disinterested, because our numbers reflected our power and ability to hold elected officials accountable. With all that power, we were able to win funding for some important housing programs! The FY23 budget fully funds 760 permanent housing vouchers with comprehensive support from case managers, legislation to seal eviction records, and the Human Rights Amendment Act, which hasn’t passed yet but would make homelessness a protected class under DC’s Human Rights Act. The Council also approved almost $450 million for the Housing Production Trust Fund and a legislative reform to strengthen oversight of the Fund to ensure that enough money is spent on building deeply affordable housing for very low income residents.

However, there’s much more work to be done in coming budget cycles! The Council only put $300,000 toward emergency rental assistance, even though we’re still in the middle of a pandemic. Neither did the Council put anywhere close to enough money into other kinds of vouchers, particularly Local Rent Supplement Program (LRSP) tenant vouchers, which help low-income residents bridge the gap between their income and their rent. The DC Housing Authority has a waitlist for LRSP vouchers that’s tens of thousands of people long and has been closed for almost a decade, but the Council only funded 20 vouchers. Lastly, while the Council did find funding for 395 long-term housing vouchers, which will primarily be given to folks being exited from the city’s Rapid Rehousing Program, we did not win funding for all of the 913 families who will be exited this year, nor did we win the necessary reforms to the program itself – namely that no one should be terminated from it if they can’t afford rent without the subsidy that the program provides. This program is meant to help get folks back on their feet after losing their homes, but instead it’s being used as a bandaid solution to chronic homelessness and we will continue to push the District to change it and to provide safe, stable housing for everyone who needs it.

A central element of JUFJ’s work is our commitment to pushing the Council on our priorities outside of budget hearings with grassroots action. JUFJ activists sent emails and participated in social media actions to continue to uplift the demands of the Excluded Workers Coalition. These mostly Black and brown workers did not receive the federal assistance checks so many of us did during the pandemic, nor were they eligible for unemployment insurance if they lost work during the pandemic. The coalition has been fighting for local funds for excluded workers so they can get the help the rest of us did. After all the emails, tweets, calls, and rallies, the Council approved $20 million in funding for excluded workers. Even though this doesn’t nearly meet the coalition’s $160 million budget ask, we’re excited that voices of directly impacted excluded workers were heard.  Excluded workers will hopefully start to see checks in their mailboxes this year. Sending emails to my councilmembers on this issue was a quick and straightforward way to make sure they knew my support for the Excluded Workers Coalition’s asks and to put pressure on the Council.

We also made our voices heard by Councilmembers by calling their offices. This year JUFJ celebrated a new (made-up) holiday just before Passover – the Festival of Phones – and ran several other call-in days at critical moments for budget issues championed by our partners and coalitions. It’s great when you call a Councilmember’s office about an important issue and hear their staff member say that yes, they’re familiar with our budget ask because several people have already called and made the same ask, and yes, they’ll make sure the Councilmember knows that I called. That’s how we demonstrate our power! One of our call-in days during the Festival of Phones was to support the Under 3 DC Coalition’s ask to expand behavioral health programs for very young children and their families so more families have access to health supports if they want them. The DC Council fully funded the coalition’s behavioral health asks in the FY23 budget.

A major win this year (outside of the budget process) for JUFJ and our partners was the expansion of paid family and medical leave benefits: now DC workers will have access to 12 weeks to care for a loved one, 12 weeks of sick leave, and 12 weeks of parental leave. This expansion is the result of years of advocacy with the Campaign for DC Paid Family Leave. We are disappointed that the Department of Employment Services decided to delay the expansion until the start of the new fiscal year in October, and that the Council did not fund making the expansion retroactive in the FY23 budget so that workers who took leave over the summer could apply for the expanded benefits in the fall. Still, we’re incredibly proud of the benefits expansion, and we’re looking forward to the continued fight for more access to more paid leave benefits for DC workers!

Work we weren’t involved in but is important! – Jenna

Lastly, we want to make sure we uplift important wins from our coalitions and partners that JUFJ wasn’t directly involved in but we still think is important and will make the District a better, more just place to live.

Want to celebrate our budget wins with us? Join us on Sunday, June 12 in Malcolm X Park!

ACTION ALERT: Tell Baltimore City to invest in our communities, not in our police department!Baltimore, MD, Budget Advocacy, Police Accountability 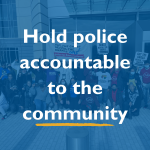