See below for JUFJ’s testimony on SB275/HB8: The Time to Care Act. JUFJ’s position was favorable. Jo Shifrin, member of the Montgomery County Leadership Team and Maryland Core Team, wrote this testimony.

My name is Jo Shifrin. I am a resident of Bethesda, District 16. I am writing on behalf of Jews United for Justice (JUFJ) and am submitting this testimony in support of SB275/HB8, the Time To Care Act of 2022. Jews United for Justice organizes 6,000 Jews and allies from across Maryland in support of local social, racial, and economic justice campaigns.

Judaism has many values that support the passage of a paid family and medical leave law: tikkun olam (repairing the world); rodef tzedek (pursuing justice); gemilut chasadim (acts of loving kindness); kehillah (building and connecting to community); tzedakah (righteous financial giving); among others.

The absence of paid family and medical leave has impacted my husband and me twice in the past two and a half decades. The first time, in the late 1990s, we discovered that my husband’s mother –who was 86 years old, living alone, and diabetic– could no longer manage her home. Shortly thereafter, she was diagnosed with the first stages of dementia. She was adamant about not wanting to be put into assisted living or a nursing home, so we found a house that could be adapted for two families and moved all three of us in together. Shortly thereafter, her health rapidly declined and I realized that I could no longer care for her and work full time. My employer didn’t have a paid family leave policy, so I was forced to leave the paid workforce and stayed home to be a full-time caregiver.We were fortunate that my husband’s job paid well enough to allow me to stay home and to cover all our bills. I’m acutely aware that many are not that fortunate, and have to make a decision between working to pay their bills or staying home to care for themselves or a loved one.

Fifteen years later, I was working as an independent contractor and was diagnosed with breast cancer. The chemotherapy I received every two weeks made me very sick for the first 11 or 12  days of every 14 day treatment cycle, so that it was nearly impossible for me to work for several months. When I wasn’t working, I wasn’t getting paid. A paid family and medical leave law would have reduced a great deal of the stress associated with being sick by lessening the financial burden of caring for myself.

At the same time I was dealing with my breast cancer, a single mother who lived nearby was suffering with the same diagnosis. She continued to work through her treatment because she didn’t have the support she needed to take time off from work. Consequently, she never had the chance to rest and recover, as I did. A few months later, as I was getting back on my feet and returning to work, I learned that she had died. I wonder if things might have been different for her if she had had access to paid family and medical leave.

SB275/HB8 would establish a Family and Medical Leave Insurance (FAMLI) program so employees could take up to 12 weeks of paid leave from work to care for the birth, adoption, or fostering of a child; care for themselves or family members with serious health or medical conditions; or address needs resulting from a military family member’s deployment. Nearly every one of us will face a situation where we need to take off an extended period of time from work for any of the above reasons. Please make 2022 the year in which we pass the Time to Care Act and finally recognize the needs of all Maryland workers and their families.

On behalf of Jews United for Justice, I respectfully urge this committee to return a favorable report on SB275/HB8. 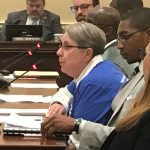