Jews United for Justice, as a Jewish organization dedicated to social, racial, and economic justice in DC and Maryland, is deeply committed to dismantling antisemitism. For too long, antisemitism has been used as a tool to manufacture division between Jews and our non-Jewish neighbors, and to create fear in Jewish communities. Some politicians and public figures are using it now, right here in Maryland. Adopting the International Holocaust Remembrance Alliance’s (IHRA) Working Definition of Antisemitism is not an effective strategy to fight antisemitism, and will instead further divisions that make all of us less safe.

There are people in Maryland who are using antisemitism and other tools of oppression to terrorize our communities. From the swastika graffitied in Bethesda to the Great Replacement Theory being espoused in Annapolis hearings, those who deliberately stoke antisemitism in our state are emboldened to attack our Jewish communities. But these threats to our safety are part of the same machinery that threatens immigrants, Black people, Muslims, and so many other marginalized communities – the safety of Jews is bound up in the safety of all communities, as the Montgomery County Council has recognized in resolutions in 2016 and 2021 that name antisemitism as one of several forms of hate that our County cannot tolerate. The Council has made its intentions quite clear in these resolutions, and any further resolutions on antisemitism should not codify the IHRA definition and examples into policy.

A public debate about the legal definition of antisemitism is unhelpful for dealing with the greatest threats our Jewish communities face in this moment. JUFJ joins Jewish organizations such as Reconstructing Judaism and Bend the Arc in expressing concern that politicizing the definition of antisemitism, as the IHRA definition does, has the impact of chilling and criminalizing free speech of Jews, Palestinians, and other community members, rather than protecting Jewish safety. Legal tools to prosecute hate crimes against Jewish people already exist. The IHRA definition was never drafted to be used as codified government policy, and was explicitly designed as a non-legal document. As we have learned through our work on economic, racial, and immigration justice throughout our region, criminalization does not make our communities safer.

The IHRA definition and examples of antisemitism furthermore conflate antisemitism with criticism of Israel. The majority of the examples do not address the acts of antisemitic fearmongering taking place in our state and are not relevant to local county government. Codifying this definition and its examples only serves to divide communities who care deeply about making Montgomery County a place where everyone can thrive, regardless of our race, religion, or country of origin.

For a quarter of a century, JUFJ has worked to build and sustain deep relationships with our partners through coalition work in Maryland and DC to demand housing for all, workers’ rights, an end to police violence, and advancement of racial equity in local government. Deep relationships allow us to call in our partners within these movements when they inadvertently or even consciously fuel antisemitism, as we hold each other accountable to the work of dismantling systems of oppression and moving toward safety for all.

As politicians and other public figures fuel antisemitism and white nationalism to further their own power, many Jews feel unsafe and frightened. We know that the way to stand up to the people threatening Jewish safety is to follow the model the Council used in 2016 and 2021 and remain united against all forms of hatred. JUFJ will continue to work in partnership with the DC and Maryland Jewish communities, our congregation partners, our coalition partners, and our members to dismantle antisemitism in all its forms. By joining together, we keep each other safe. 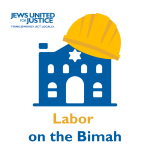