Over the last four years, like so many people I know, I have attended many protests. At the Women’s March back in 2017, I remember feeling a jolt of energy upon hearing the back and forth chant: “This is what democracy looks like!”  I was part of a national group of passionate people working together to upset the status, part of a legacy of American protest.

However, when I joined over 120 other organizers and community members on zoom last week to watch the public hearing of Montgomery County’s Police Free Schools Bill, I realized that Democracy actually looks like the smaller, significantly less glamorous inner workings of our local government — and the work of its private citizens as they shape the process.

For an hour, we watched and commented on the testimonies of the 33 speakers. 31 speakers provided powerful speeches in support of the removal of School Resource Officers (SROs) from our schools. Almost half of them were high school students who have been organizing, researching, and advocating tirelessly for police free schools.

JUFJ’s own Janeane Marks, a registered school nurse, cited several examples of SROs trying to undermine her medical expertise. And Daniella Mehlek-Dawveed, one of the lead organizers with the student-led organization MoCo Against Brutality, ended her testimony with a powerful statement: “Our trauma is not something to be debated or ignored.” There was so much powerful testimony from the hearing that I could fill two pages with highlights!

For me, the most powerful moment of the hearing came from Tiffany Kelly, who shared a vulnerable and frustrated testimony, noting that study after study has been presented but not heard, and there is simply no explanation except that leadership does not care. “Be honest with me,” she said, but more importantly, “be honest with yourselves.”

Here we were, a gathering of community members all working to make a change in how our local community supports students.  Even over Zoom, I felt the electricity shared by those in our watch party, and I felt a deep connection to those sharing their heartfelt testimonies. It was a room I had never been in before. A room where so many decisions are made that affect our daily lives.

The hearing of the Police Free Schools Bill might not make national headlines the way hundreds of thousands of people gathering in protest will, but the effect of the bill’s potential change in policy cannot be underestimated. This, I have come to understand, is where the hard work of the democratic process happens. This is what Democracy looks like. 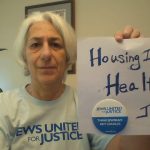 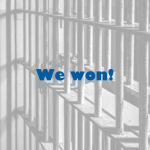