Six candidates for Ward 2 DC Council gathered in Dupont last month with hundreds of voters for a forum to kick off the 2020 election season. JUFJ co-hosted the forum along with the DC Working Families Party, DC for Democracy, and others.

Notably absent from the stage was current Ward 2 Councilmember Jack Evans, who has yet to file for reelection. Despite his absence, Evans was the elephant in the room.

The candidates each tried to distinguish themselves both in terms of ending corruption and in pursuing a more economically and racially just agenda on the Council. On stage were:

The field of challengers agreed on many issues and highlighted the need to address the housing affordability crisis, transportation equity, and corruption in DC government. Notable areas of disagreement were on the issues of constituent service funds, decriminalization of sex work, and reshaping DC’s tax code to fight inequality. It was clear from the turnout and audience reactions that there is appetite for a major change of direction in Ward 2. Each challenger was asked if they would step aside if it became clear their candidacy wasn’t viable. 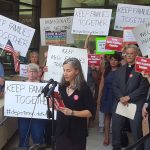 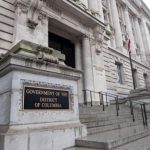