Good evening, Councilmember Bonds and members of the committee. My name is Jenna Israel, and I’m a renter in Ward 1. I’m a DC Community Organizer at Jews United for Justice, a community of thousands of Jews and allies committed to advancing social, racial, and economic justice in DC. My testimony today is in support of the Green New Deal for Housing Amendment Act of 2022, but before I begin, I’d like to note my disappointment that this hearing was unexpectedly moved, which has excluded working people who made time in their schedules to advocate for a more just DC. All District residents deserve the opportunity to speak to their elected representatives on issues that matter to them, and the Council has failed in its duty to make this hearing accessible.

As the Council knows, housing is a fundamental need for every District resident, yet thousands of DC residents face housing insecurity. Every day, as rents skyrocket, DC residents are being priced out of homes and forced to live in unsafe conditions, live in shelters or on the street, or even leave the District altogether. Because of the District’s history of intentionally discriminatory housing policies, and inequities exacerbated by the pandemic, this crisis is most prevalent in Black and brown communities. As displacement ravages neighborhoods where families have lived for decades, the District has a responsibility to do everything it can to address this crisis at the root.

Jewish tradition makes clear the responsibility a community has to its members, especially those who are struggling. The Shulchan Arukh, sometimes referred to as the Code of Jewish Law, dictates that it is incumbent upon the community to provide what someone needs: “if he is hungry, he should be fed; if he needs clothing, he should be clothed…if he ought to be provided with lodging, too, provide a bed for him.” (Shulchan Arukh Yoreh De’ah 250:1). What’s more, according to the Shulchan Arukh, “the poor in a city” should “be supported by the members of the community in proportion to their wealth” (Shulchan Arukh Yoreh De’ah 250:5). Those with access to greater wealth are called to support those who have access to less. It’s this sense of community care and obligation that the Green New Deal for Housing embodies. Social housing is a literal representation of that redistribution and support, with market-rate renters subsidizing the rents of low-income tenants in their building. In this way, the Green New Deal for Housing will address one of the roots of the housing crisis – economic inequity and injustice.

Social housing will also help fill a gap in affordable housing in the District. The need for more affordable housing is becoming more and more pressing for DC residents, but the supply is severely falling short of meeting that need. The Housing Production Trust Fund has started to address this difference between supply and demand, but the Department of Housing and Community Development has not met the statutory requirement to use 50 percent of the HPTF for deeply affordable housing. The District continues to underfund housing voucher programs with waitlists thousands of people long. Additionally, recent reports on the DC Housing Authority have shined a light on the severe problems that public housing tenants have been speaking out about for years – from over a thousand vacant units to unsafe and unsanitary conditions in buildings, it is impossible to ignore that this government is failing low-income DC residents. It’s clear that programs like the HPTF are not enough. An Office of Social Housing Development as created by the Green New Deal for Housing could be a revolutionary new tool for the District to provide stable affordable housing to its most vulnerable residents.

JUFJ encourages you to listen to the testimony of our partners today as they lay out the ways that this bill could build a program that revolutionizes DC’s affordable housing system, but more importantly we urge you to listen to the testimony of the public housing tenants and other residents who have been impacted by our housing crisis. They are the experts. They are going to lead us to the DC we all want, a city grounded in community care where everyone has a safe, stable place to live.

JUFJ looks forward to the Council’s plans to move the Green New Deal for Housing forward, and to advocating for its full funding and proper implementation. Thank you for the opportunity to testify.

Tell the Council to support the Green New Deal for Housing! 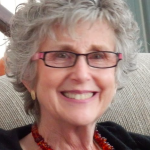 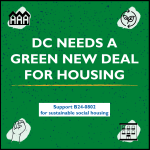