As Councilmembers Gray and Silverman said during DC Council meetings, this year’s budget session was an assortment of unmentionable expletives. But we made it through, with some important victories for a moral DC budget.

Back in April, JUFJ and many organizational partners launched #JustRecoveryDC as a rapid response campaign to fight the prospect of devastating austerity, and to shine a light on how funding choices that elected officials had made over many years were resulting in disproportionate harm from COVID-19 to many Black and brown DC residents. Through months of evolving goals, amid a national uprising against anti-Black police violence, JUFJ leaders took steps to create a more just society in which all people have what the Torah calls dei machsoro — resources sufficient for their needs — and in which police resources are redistributed to meet those basic human needs.

Some good news from the budget fight:

We did not win every budget fight this year. In the end, the Council’s final budget still failed to:

In a truly unprecedented move, Chairman Mendelson decided abruptly, during a Council meeting, to cut $18 million from the budget, and suddenly declared a recess to decide what he would cut — without any public input. The Chairman proposed cutting libraries, rental assistance, and aid to workers, and jeopardizing funding for mental health services, child care, and homelessness prevention. This manufactured crisis triggered an outpouring of opposition. Through JUFJ’s Action Alert, DC residents sent over 6,000 emails to Councilmembers in 48 hours, helping to prevent the worst cuts but still losing much needed new, long-term funding in the budget.

None of this year’s wins – including raising revenue and scaling back corporate handouts – were inevitable. They happened because of the brilliant, committed, and strategic coalition partners we worked with on the #JustRecoveryDC campaign; JUFJ’s volunteer leaders; and allied Councilmembers.

But troubling undercurrents in this year’s budget cycle suggested a lack of empathy from many of our elected leaders, and a disdain for community advocates. During the final budget meeting, lawmakers argued for hours about how to cut some people out of the inadequate $9 million cash assistance package for excluded workers — and they did not consider expanding this pool of money. The week prior, Councilmembers had miraculously found $11 million to offset a proposed corporate tax, while underfunding workers, child care providers, and homelessness prevention by many millions of dollars.

If a budget is a reflection of a city’s morals, we still have a long way to go. We know that because of the pandemic, this year’s fiscal decisions are not over yet. Stay tuned for what we can do together to ensure a truly #JustRecoveryDC.

Join us for our next #JustRecoveryDC campaign call on Wednesday, August 12 at 6:30 PM. We will hear from organizers leading campaigns to support excluded workers, challenge police misconduct, and defund MPD. We’ll also review our Just Recovery campaign so far, discuss next steps, and take action. 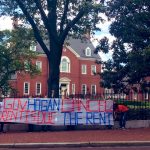